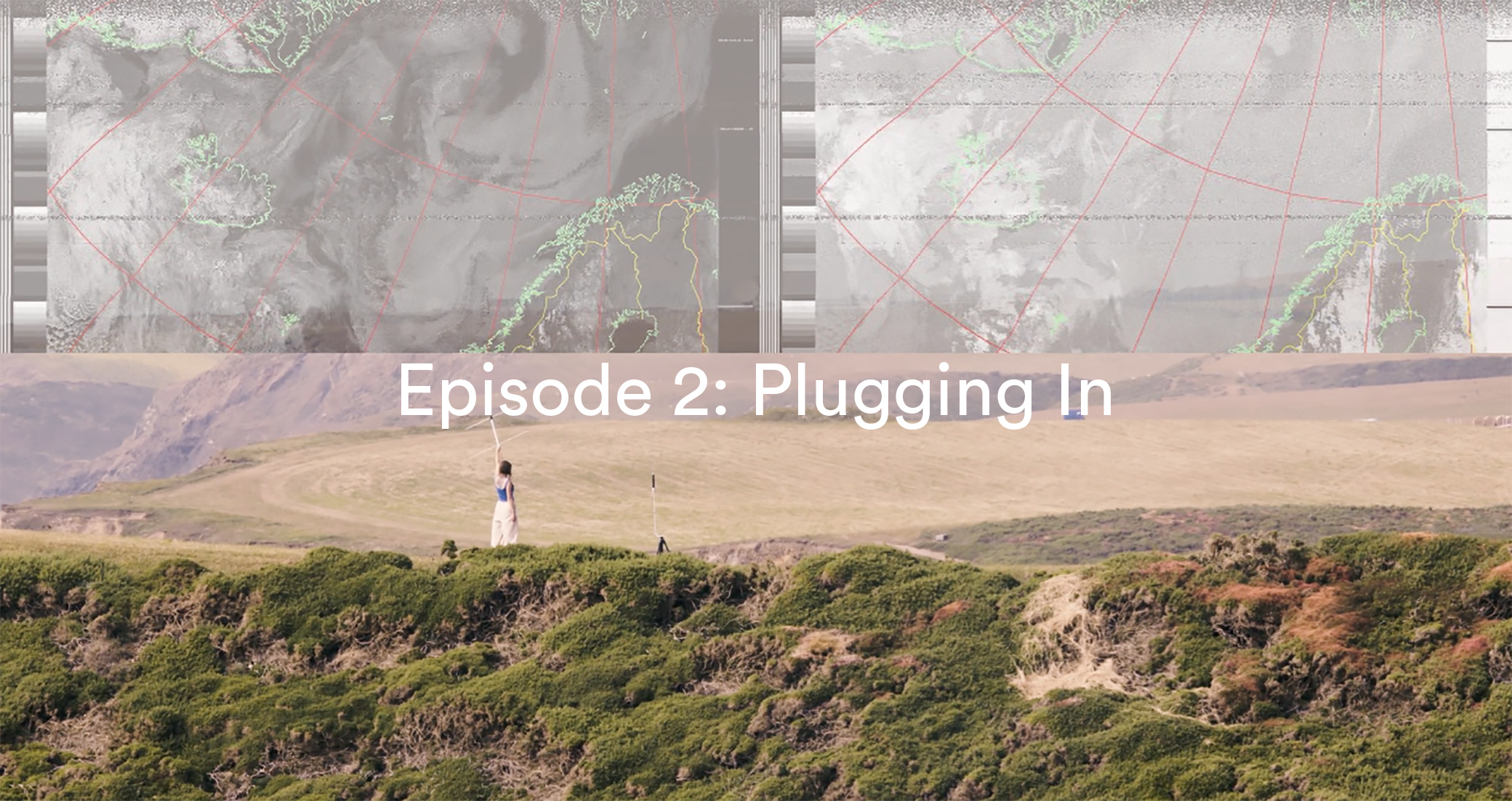 If you prefer an alternative format you can listen to Alison reading episode 2 on Soundcloud.

Satellite Séance is a new video work by open-weather (Sasha Engelmann and Sophie Dyer). The film documents electromagnetic experiments—performed by Sasha on 12th July 2019—and the process of decoding images of weather systems via polar-orbiting NOAA satellites. Sasha also reads the voiceover.

On the horizon of the static camera shot, an array of bright white dishes and domes overlook the landscape—cliffs, rolling hills with scrubby grass and a public path. We see Sasha standing in this scene on what looks like a hot, sunny day, in the shadow of GCHQ Bude, a UK government ‘listening station’ in Cornwall (the site provides signals intelligence and information assurance to the government and armed forces of the United Kingdom[1]). At this ‘listening station’, civilian data is captured through internet probes and the NSA-GCHQ collaborative interception of satellite downlinks over the Atlantic.

The sky is full. In this militarised space, espionage is networked to meteorology.[2]

A cyclist whizzes by. Do they notice the station, know what it is, what it listens to? Do they notice Sasha, wonder what she is doing? This is a place where invisible infrastructures of communication can be seen and felt, where eavesdropping happens at state scale, and where (temporarily) Sasha’s enactment of a portable, handheld DIY ground station sets up an alternate relationship to this territory, the unseen. We watch her extending her antenna, recording the sound from a passing satellite, and moving as its orbit crosses above this place, North to South. This is the sound we hear in the video, emerging from static and radio interference, as Sasha feels for the distinctive radio transmission of the satellite NOAA 19. An image gradually loads from top to bottom on the screen.

The title of open-weather’s video, ‘Satellite Séance’ suggests they are exploring beyond the performative and political dimension of satellite sensing. They reference the clairvoyant practice of séance often performed by women, that boomed in the 19th century with the advent of the telegraph and radio, as a tactic to explore the embodiment of weather sensing and imaging.

In open-weather workshops technological operations are entangled with readings from literatures of séance and mesmerism, where participants work together to build their own satellite ground stations whilst engaging with feminist ideas of embodiment, sensing and care.

I take part in a remote workshop with open-weather, learning how to set up a portable satellite ground station from my flat in Glasgow. Sasha coaches me through some basic physics in an introduction to amateur radio practices. An antenna has arrived in a box to my door. I assemble it: a spindly legged thing. A couple of cables came with it, and an SDR dongle device, all to be plugged in to my laptop. I run the open-source software I’ve compiled under her instruction. This setup will be my interface with the satellite I hope to sense: I will be part-medium, my body extended, as part of a listening and receiving device.

‘The ‘I’ as an enigmatic atomic cluster, traversed by invisible waves and rays, so very like every other and yet not like any other.’[3]

I go to the back green of my tenement. Stand next to the bins and old mattresses, the domain of squirrels and overgrown grass, and hold the antenna to the place I’m told the satellite will appear. I have never stood so long in this spot, have I? A sense of disbelief when the clicks and beeps I’m seeking come through from the static, before the thin view of the sky is obscured by the high red sandstone flats, the transmission is interrupted. The satellite’s broadcast cannot move through buildings. It doesn’t bounce. This new sound meets familiar noise: I hear it turn to static again and join the echoes of dogs barking, chattering from back-garden meetings, a lorry beeps and the jangle of a distant ice-cream truck reverberates between the close lines of flats. A neighbour appears with their rubbish, listens in, chats, moves on.

‘Urban surfaces, volumes, and voids function as sounding boards and resonance chambers for mediation, and as transmission media themselves.’[4]

From the hill in the nearby park the next day I have a better view of the sky, an arc I can draw from horizon to horizon, North to South (just about) as the satellite continues its polar orbit. Picking up a clearer sound, it is satisfyingly crisp: the call of NOAA 19. Can I say it speaks? To my ears it is a lyric metronome, a steady rhythm of high pitched beeps and ticks: a distinctive voice. This is the same sound as the soundtrack to ‘Satellite Séance’, the signature that I try to trace across the sky, moving against the static, before the satellite moves beyond the horizon. Attuning to a parallel world, unseen but heard. I hear you.

‘A politics of listening does not simply seek to amplify voices and have issues heard, but rather attempts to redefine what constitutes speech.’[5]

An interjection of Glasgow patter: ‘when you speak to the aliens will you ask them to rescue us’. Ha, yeh, I will try, got it.

I do this exercise each morning now: checking for a pass that might come at a time and trajectory I can hope to catch. Propping my laptop on a park bench; a picnic table, a wall, or a blanket on the grass.

Return to the open-weather project page