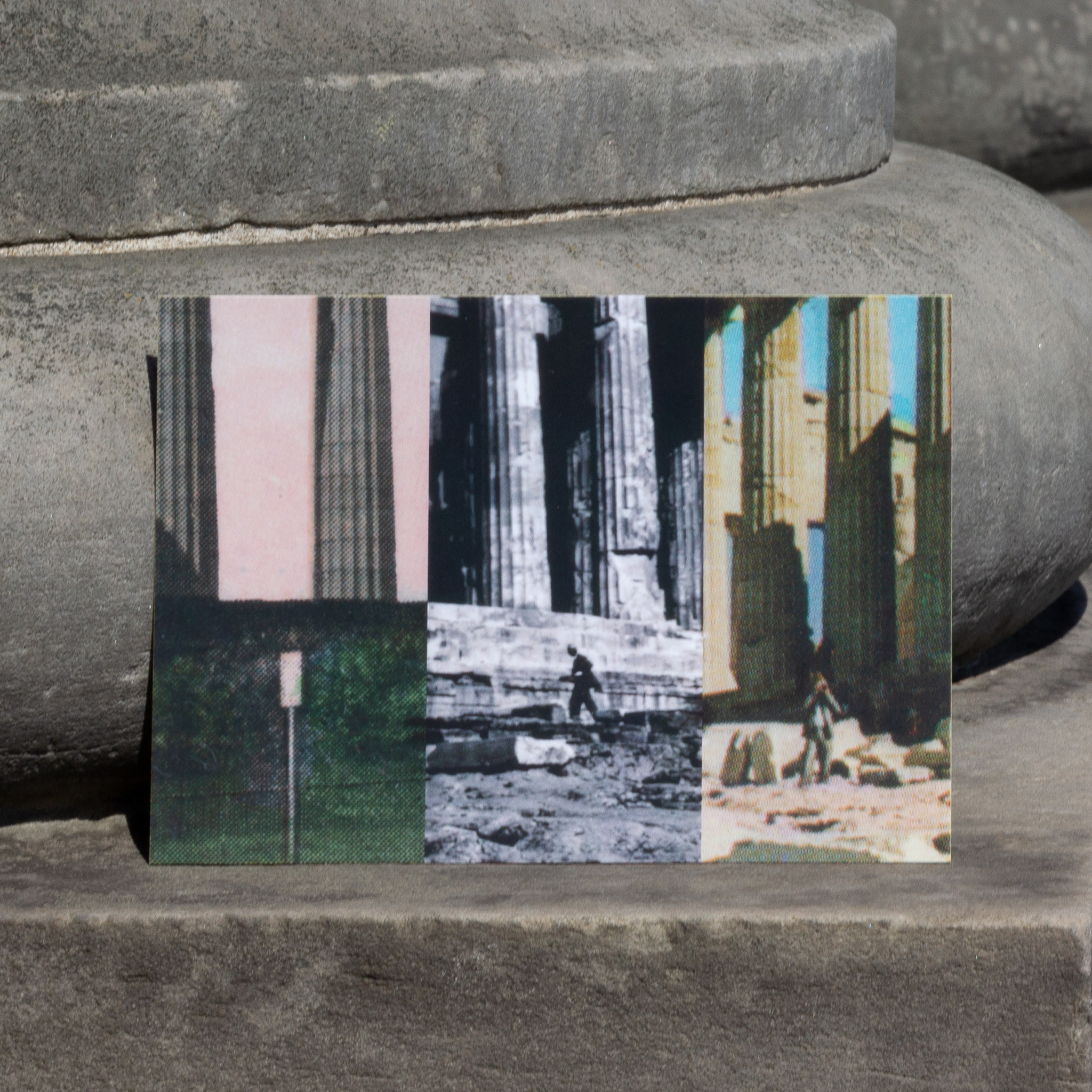 Since beginning her residency with Collective in mid-January 2020, artist Karen Cunningham has been looking at vintage postcards as one of several forms of source material related to her research into Collective’s home on Calton Hill. As the Coronavirus pandemic unfolded, the resources she had planned to utilise within her project; locations, structures and archives, became inaccessible. The postcard, an object which epitomised travel as a leisure pursuit rather than a necessity, then became foregrounded within her research.

One of the resulting new artworks from Karen’s residency, Another Just Past, is a series of four postcards that already include a ‘message’, and which therefore occlude the sender from writing their own. Collaged from existing postcards featuring Calton Hill and the Parthenon (itself another iconic tourist site) which the National Monument on Calton Hill was based on, these postcards act to obscure or complicate the notion of a typifying view which photographic picture postcards characteristically confirmed.

As discrete objects of material culture in transit, picture postcards are moving images committed to, yet separated from, the text which they carry. Having had its ‘Golden Age’ in the late 19th and early 20th centuries the (real) photographic picture postcard embodies concepts and technologies of communication, photography, mass production, individualism and travel. As a ‘just past’ technology the postcard is not yet obsolete, but is increasingly superseded by faster, cheaper and more user-friendly means of sending images and text.

Another Just Past utilises the seemingly innocuous format of the postcard to consider how forms of expansion, colonialism, and technological progress relate to the sites which they depict. Another Just Past can then be used as a series of invitations to consider (or to invite another to cogitate) how pasts, which may or may not be just, or fair, or true, are embodied within the present.

Karen’s postcard series is free to pick up from outside the City Observatory building at Collective while the building remains closed throughout July 2020.

Karen Cunningham is an artist based in Glasgow. She is currently undertaking a practice-based PhD titled, ‘World-Making and Un-Doing’ at Edinburgh College of Art.

Her work has been presented throughout the UK and internationally including group shows, events and screenings at, Shanghai Minsheng Art Museum, China; Whitechapel Gallery, London; the Palace of Culture & Science, Warsaw, Poland, and Nightingale Cinema, Chicago and Goldsmiths College, College, London. Recent exhibitions include the 3-person show Make something with your body at vbkö, Vienna, Austria and the solo show Deploying Culture at Cample Line, Scotland.

Karen Cunningham Another Just Past 2020 2

Karen Cunningham Another Just Past 2020 3

Karen Cunningham Another Just Past 2020 4

Karen Cunningham Another Just Past 2020